A few years ago a new store opened in our hometown of Grand Junction Colorado. The stores name was Colorado Electric bikes. Good people, good store.

My wife and I were at a peach festival in Palisade Colorado, Colorado Ebike had a booth at this festival, With their ebikes on display. Having just bought a serious mountain bike a year earlier I was very interested in anything Bikes. 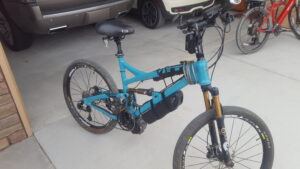 The bike that I had bought earlier was a yeti SB 66. I walked into CBB which is Colorado back country biker in Fruita Colorado to see what they had for sale. The salesman pointed out that their rental bikes were being updated to new ones and were for sale. I took the yeti for a test ride on the Kokopelli trail at Loma Colorado it took about 100 yards for me to fall in love with this bike. When I returned the bike, the sales man said the bike was on sale for $1000 I wrote a check and have not regretted it yeti. I still have the bike six years later.

Back to the Ebike encounter at Palisade Colorado. I was very interested in the mountain Ebike, I got their business card and stopped at the Ebike store Grand Junction the next week. Having been in the electronics business my whole life I was very easy prey for the salesman. I test rode and Ebike called the Polaris rail and bought it thinking my wife would like it because it had low step through design. It had suspension on the front wheel only but it was fun to ride and with the hub motor pedal assist or throttle, eliminated the hills, it was now fun to ride uphill.

So now my new favorite store was Colorado electric bike. I was frequently going into the store for something. It wasn’t long until they got a new brand of Ebike. The bike that caught my eye was by the emotion company the model was the neo jumper mountain bike. It was a full suspension mountain bike and I traded in the Polaris for it. By the way, my wife doesn’t like the way the Polaris Rode. Now since I was getting a new Ebike, she started test riding the bikes too. She settled on an emotion brand Hardtail.

The Neo jumper was made by Emotion and had 30 speeds with a 350 watt geared hub motor powered by 36 V 9ah lithium battery. Front and back disc brakes, a throttle, pedal assist would push me down the road at 28 miles an hour easily. The bike weight is 48 pounds that you don’t feel the way with the motor assist. It’s a respectable mountain bike with 120 mm which is 5 inches of suspension travel front and rear. 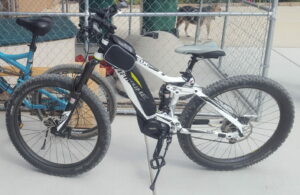 With the technology moving ahead so quickly it wasn’t much over a year and I was looking at the newest Ebike to show up on the Colorado Ebike show room floor. The newest manufacture they were carrying was from haibike. The Ebike was a 27.5 inch SDURO all mountain plus.

The all mountain plus Ebike had 3 inch wide tires and was much better for soft ground, it had a better suspension system with 150 mm which is 6 inches of travel front and rear, with the dropper seat post, a mid drive 500 watt motor system and two sprockets in the front making it a 20 speed. This bike was pedal assist only, making it a class one ebike, usable on more controlled trails that don’t allow class 2 or 3 ebikes.

After one ride around the parking lot I was writing a check for $4800 plus tax. This Ebike felt like the top-of-the-line mountain bike maybe in a class just below my yeti; I love this mountain Ebike. The YETI is parked for now but more on that later. Riding rough rocky trails, my wife, in short order decided a full suspension Ebike was looking like a requirement. So to Colorado E bike we went; she found an SDURO full nine haibike, the full nine means full suspension, 29 inch tires. It has a 250 W motor, 20 speeds, 400 W hour lithium ion battery. It also has 100 mm suspension travel and dropper seat. The bike comes in three sizes, the small size fit my wife nicely. Now we’re equal on any trail and she loves it.

Our biking skills would be classified as intermediate at best. Due to our ages, I’m 70 she’s 68 we ride the easy trails almost always, At my age going over the handlebars is a very big no-no. Slow down and enjoy the ride, the days of jumps in speed are in my rear view mirror.

As I mentioned earlier, back to the yeti. Having loved the yeti SB 66 so much and loving the Ebike concept, I decided to combine the two. Yes, I installed a mid drive Ebike motor kit on my YETI. I bought a 750 watt kit with battery from Colorado Ebike. The kit came with everything I needed to make a class 2 Ebike, capable of 28 mph. With only a single sprocket upfront, my 30 speed bike became a 10 speed bike, this proved to be no problem at all, due to the fact I now have a 1 hp electric motor helping me pedal in each of those 10 speeds. The class 2 ebike has a throttle, so peddling is an option now.

The customization of the yeti happened before I bought my first Haibike, and it was the first mid drive motor system I ever had. It’s sold me on the mid drive concept. I still have and love the yeti and it will stay in Ebike for now, I can change it back to its original configuration in a couple hours if needed. But the advanced Technology in the Haibike make it the bike of choice for now. I do have my eyes open, looking for a full suspension fat tire mountain bike.

I have moved from Colorado to the warm climate of Phoenix Arizona area. With more sand here, a flat tire Ebike may be in my future.